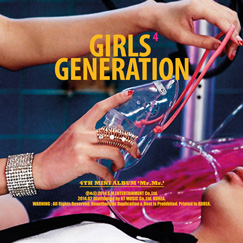 
The No.1 girl group, Girls’ Generation will make their comeback with their 4th mini album ‘Mr.Mr.’.

This is Girls’ Generation’s new album after about a year and two months since their fourth full-length album, ‘I Got a Boy’. It will be more than enough to mesmerize music fans once again as they can experience the new music and performances of Girls’ Generation who has always presented new aspects of the group and continued their hit parade with every album.

The 4th mini album ‘Mr.Mr.’ contains six tracks of various genres including ballad, dance and synthpop. The participation of global hit-makers including The Underdogs, Lindy Robbins, Brent Paschke, and Kenzie added the perfection to the album.

Last year, Girls’ Generation won the ‘Music Video of the Year’ award in the main awards of the ‘YouTube Music Awards’ with ‘I Got a Boy’ for the first time as an Asian singer. Furthermore, ‘I Got a Boy’ was on the list of US TIME Magazine ‘Top 10 Songs of 2013’ and ’44 Most Anticipated Albums of 2013’ by the US music cable FUSE TV proving their global popularity. It is expected that this album will also capture the heart of music fans around the world.

Girls’ Generation Cheers for All the ‘Mr.’ – Title Song ‘Mr.Mr.’

The title song ‘Mr.Mr’ is a dance song highlighted by the R&B sounds unique to The Underdogs, the global producing team that worked with renowned pop stars including Beyonce, Chris Brown and Justin Timberlake. The lyrics cheer for all the Misters like ‘Mr.Mr. be more confident, Mr.Mr. you make my heart beat’, and ‘You have the keys to the future, You have bigger dreams than boys’. They tell misters not to be afraid, be stronger and be more confident. Fans will be able to experience more matured and powerful music of Girls’ Generation.

‘Goodbye’ is a collaboration between Brent Paschke, the guitarist/composer of the American pop rock group ‘Spymob’, and Lindy Robbins, a composer who worked with top pop stars such as One Direction and Selena Gomez. The guitar sounds throughout the song and the sad lyrics about breaking up are relevantly well-mixed which doubles the charms of this song.

‘Europa’, a synthpop track highlighted with familiar melodies, has impressive lyrics that compares the pains of love to the satellite Europa, which eternally orbits Jupiter but cannot get closer. ‘Wait a Minute’ combines vintage sounds and retro-style rhythms with bright melodies, going well with the rhythmic vocals of Girls’ Generation members.

Other songs include ‘Back Hug’, a medium tempo song with emotional lyrics and ‘Soul’ a song with a powerful message challenging youngsters to find their soul. There are a total of six tracks of various genres in this mini album and it is expected to receive warm welcome by music fans.