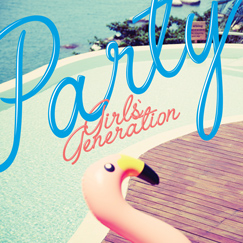 
No.1 girl group, Girls’ Generation, is making a glorious comeback.

Girls’ Generation will be releasing and fully promoting the brand new single ‘PARTY’ on July 8 and are expected to draw eyes and ears of fans around the world who have eagerly anticipated for the  new music and performance.

Especially, they have fully devoted themselves  to this album as they are returning to the home stage in a year and half after the release of the 4th mini album, ‘Mr. Mr.’, released in February last year.  They are planning to release the regular album with double title, ‘Lion Heart’ and ‘You Think’ following after the starter single, ‘PARTY’, to deliver a variety of music and activities and will be promoting these three songs with distinct colors. They are definitely expected to sweep the popular music world this summer with the Girls’ Generation craze.

Girls’ Generation has continuously showed the mega hit parade each time they released a new album, proving their status as the No. 1 girl group. Also, as they turned female fans into their wannabes by perfectly presenting various concepts while bringing everything about them into vogue from choreography to fashion and even hairstyle, fans are anticipated with the exciting diversity in the new look and feel of Girls’ Generation even more enthusiastically.

The title song of this single album, ‘PARTY’, is a fresh and exciting summer pop song, and it exquisitely combined the bass sound that resonates through the heart and the rhythmic vocal of Girls’ Generation members. The refreshing feeling suggests a run along the beach and the cool and lazy air under the hot summer sun come into mind, making it more attractive each time it is played.

Another song in the album, ‘Check’, is an R&B song with a sexy and groovy ambience that attracts ears. The expressiveness of Girls’ Generation members stands out as they lead the song glamorously with their gentle voices, and the lyric that depicts the tension between a man and a woman who intuitively feel the attraction toward each other without the need for a word, makes the song more appealing.

The album also includes the instrumental version of ‘PARTY’, and all 3 tracks will be enough for listeners to fully experience the charms of Girls’ Generation who turned into the ‘Goddesses of Summer’ and will surely triple fans’ interest in the regular album to be released later.