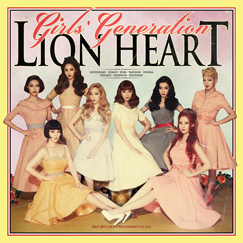 Girls’ Generation is releasing their 5th regular album led by two title songs, ‘Lion Heart’ and ‘You Think’, following the preceding single, ‘PARTY’, as they hinted when they announced their return in July and is going to mesmerize the music fans once again with the songs and performances of various colors.

This album lists a total of 12 songs presenting various musical characters of Girls’ Generation including the double-title songs ‘Lion Heart’ and ‘You Think’, and the hit makers inside and outside the country including The Underdogs, Kenzie, and hitchhiker teamed up for the album to elevate the quality of the music.

Girls’ Generation proved their status as the No. 1 girl group again by sweeping #1 on various digital track, album, M/V, and music program charts at home and overseas with the preceding single, ‘PARTY’, and also made news each time they released a new album by setting the trend for music, choreography, fashion, and hairstyle, growing fans’ expectations further for the new images and promotions they will show through this album.

The title song, ‘Lion Heart’, brings back the retro style emotions from the 60’s in America. The signature sound of the bass line that captures ears at once from the introduction is perfectly combined with the highly addictive melody alongside the lyric that depicts the cute and lovely intent of a woman who compares an wild mustang-like man to a ‘lion’ and wishes to ‘tame the lion heart of your’s.’

The other title song, ‘You Think’, is a powerful pop dance song giving quite an opposite feeling compared to ‘Lion Heart’ with the lyric that expresses the heart of a tough woman who gives a lesson to the ex-boyfriend who spread nasty rumors and gossips about her after breaking up. The song is rendered with excellent vocals of Girls’ Generation members, and the brilliant improvisation in the latter half and energetic performance will give listeners the fun of listening and watching simultaneously.

‘One Afternoon’ depicting calm emotions serenely renders the memory of old love that suddenly came into mind in a typical afternoon with acoustic sound. ‘Show Girls’, previously listed in the group’s first best album in Japan released in 2014, is given a new look in Korean version for the fans at home and is suggestive of the Las Vegas show with the bright brass band and drum combined with the heavy bass sound.

Other songs in the album are also great to listen. ‘Fire Alarm’ presents powerful and lilting sound with the lyric that compares the instinct of woman who falls for dangerous but charming man to the ‘fire alarm’. ‘Talk Talk’, the impressive R&B, poetically renders the lyric by referring the man they love as ‘he’ and the falling rain as ‘you’ and using homophones such as the English word, ‘Talk’, and the Korean onomatopoeia for dropping rain, ‘Tok.’ Also, ‘Green Light’, a refreshing and bubbly pop dance song, repeats the sound word of automobile horn, ‘Beep Beep’, and expresses the feeling of the man they like through the traffic lights in the lyric to add fun to listening.

The album also presents ‘Paradise’ that renders pure emotion that one would have in the paradise through the beautiful melody and lovely lyric. Moreover, ‘Sign’, combines the funky guitar and refreshing vocals of Girls’ Generation in a rhythmical sound, and ‘Bump It’ that delicately depicts the heart of a woman who fell in love within the lyric using the four steps of composition. ‘PARTY’, the summer pop song that was released previously and won great feedbacksis included as well as ‘Check’, a sexy and groovy R&B. 12 songs of the album will present the rich and characterful music of Girls’ Generation in various genres.

Meanwhile, Girls’ Generation will be promoting with the double-title songs, ‘Lion Heart’ and ‘You Think.’