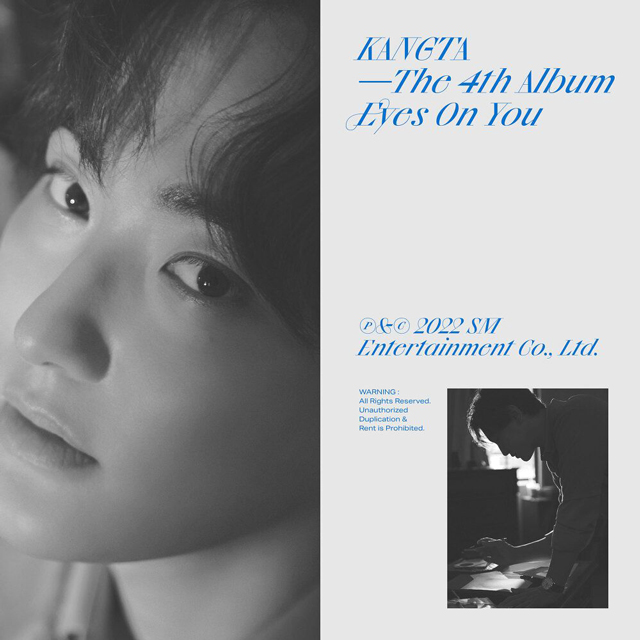 KANGTA Releasing the 4th Full-Length Album ‘Eyes On You’ on September 7th!

Coming Back with the Full-Length Album Celebrating the 26th Debut Annivesary, with 10 Songs of Various Charms!

KANGTA (SM Entertainment) is releasing the fourth full-length album, ‘Eyes On You,’ on September 7th.

This album delivers ten songs including the lead single ‘Eyes On You’, and features various artists, including TAEYONG of NCT, rapper Paloalto, and R&B soul group Heritage, to add the charms.

In particular, this album celebrates the 26th anniversary of KANGTA’s debut and is the first full-length album released since the 3rd album ‘Persona,’ which was released in 2005. This new album will be an opportunity for the listeners to experience the new music styles of KANGTA, who released several original songs and made many hits over the years, and will draw great interest from music fans.

Single ‘Eyes On You’ – R&B number in a romantic mood!

The single, ‘Eyes On You,’ is an R&B song presented through the harmony of tight drum rhythms and laid-back string sounds. The lyrics rhetorically compares the romance of a couple in their lone time to a dance surrounded by the night view.

The new song, ‘Skip’ is an R&B pop song with a groovy bass line and percussive rhythm. The lyrics express that love comes first above everything else. TAEYONG of NCT participated in the rap lyrics and as the featuring artist to add the charms.

‘Love Song’ is a dance-pop song marked by an addictive analog bass and synth sounds. The song expresses the sweet, loving words that one would soak into the lover’s day like the humming in everyday life. The featuring artist Paloalto adds onto the song with charismatic rap.

'Bucket List' is a pop song with delicate melody and rich harmony. The lyrics depict one’s wish to be bound to the lover until the end of life. Heritage, an R&B soul group, participated as the featuring artist to enhance the mood of the song.

‘The One’ is an acoustic pop song that harmonizes emotional guitar with heartwarming vocals. The lyrics portray an eternal love in this world where everything else changes ever so quickly. 'Persona 2022’ is a newly arranged version of 'Persona’, the lead single of KANGTA’s third full-length album released in 2005, and it presents KANGTA’s mature vocals with the minimalistic electic guitar sounds that makes the song more refined and trendy overall.

Additionally, the album includes the four singles pre-released through the 25th debut anniversary project - ‘Freezing’, 'Christmas in July,' ‘Maybe,’ and ‘Slow Dance.’ Through all these ten tracks that each appeals to the listeners with different charms, the listeners will be able to enjoy KANGTA’s mellow voice and his matured view of music.