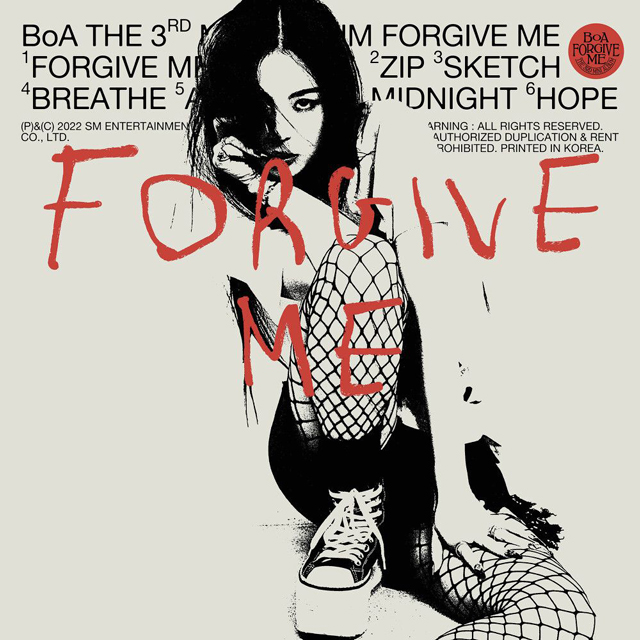 Delivering 6 Tracks of Various Charms, including the Single, Partially Written, and Composed by BoA!

'No.1 Artist,' BoA (SM Entertainment), is releasing a new mini-album, 'Forgive Me,' on November 22nd.

It is a new album released about two years after BoA released 'BETTER,' commemorating the 20th anniversary of her debut in 2020. It comprises six songs of various charms, including a single partially written and composed by BoA.

In particular, BoA has hit a winning streak with high-quality music and unparalleled performances in each album she released. Expectations are high for the unique music style she is presenting through this album.

Single, 'Forgive Me' - An intense and cool hip-hop dance song, partially written and composed by BoA!

The single, 'Forgive Me,' is a hip-hop dance song with an intense electric guitar sound. The lyrics that take a jab at the person deluded and judges while trapped in his or her jaundiced mindset are well-matched with charming low-pitched vocals. BoA participated in writing and composing the song to raise its quality.

This album also includes two songs composed by BoA. 'Sketch' is a new wave-based pop song with vocals that express the loving heart simply and delicately. 'Hope' is an acoustic ballad song that expresses gratitude and love to family, lovers, and friends who are always by her side when she is exhausted.

In addition, 'ZIP' is a pop dance song featuring a groovy guitar and vocals with R&B funk. The lyrics contain a cold warning to a lover who has caused the end of an irreversible relationship.

'Breathe' is a hybrid electronica track that dramatically depicts the moment two people became close enough to feel each other's breath. 'After Midnight' features a warm acoustic guitar melody and BoA's sentimental vocals. With all six songs in the album, you can enjoy the various vocal charms and music world of BoA.