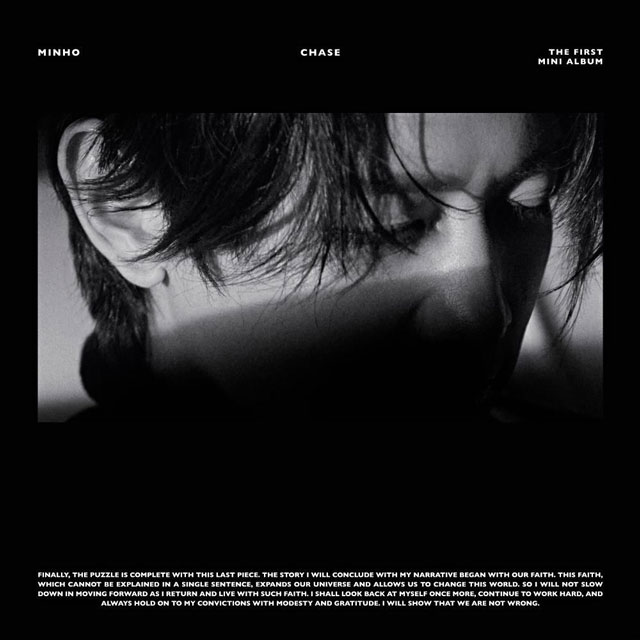 Filled with 'MINHO Vibe'! Raising Quality from Featuring to Staff!

As MINHO's first solo since his debut, this album includes six songs with various styles, including the single, 'Chase,' which presents MINHO's unique musical sensibility.

In this album, MINHO participated in writing the lyrics for 'Runaway' to add charms to the song. Singer-songwriters GEMINI and Lim Kim joined the project to support MINHO. Famous domestic and foreign artists such as IMLAY, LDN Noise, ChaCha Malone, and Josh Cumbee also participated in making the album.

MINHO is gaining global popularity as a member of SHINee, and has proven his versatility in various movies and dramas as an actor as well. Expectations are raised for his new comeback as a solo singer.

The single, 'Chase,' is a hip-hop R&B-based medium-tempo pop song with piano loops and an arpeggio synth with heavy bass lines added to create an emotional yet sophisticated mood. The lyrics express the painful and empty feelings of MINHO chasing after someone in his dream. He, however, eventually fails to catch up and wakes up.

'Runaway' is a hip-hop song featuring GEMINI. Its lyrics, partially written by MINHO, tell the story of a relationship that eventually breaks down even after he tries to win back the heart of the one who left him. 'Waterfall' is an R&B song with unique vocal chemistry between MINHO and Lim Kim. The words draw attention as they describe the falling for a fascinating person, using 'water' as the metaphor.

'Prove It' is a song of which MINHO asks his lover to believe him so that he can prove love although it cannot be seen. 'Choice' offers warm comfort with autobiographical lyrics looking back on the past and finding enlightenment. 'Heartbreak,' released as a year-end single for fans in 2021 and received a favorable response, is a part of the album as well.