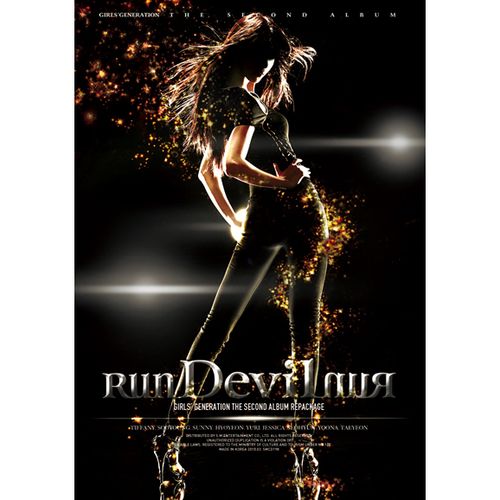 
Girls’ Generation is going to start another craze with the release of the repackaged version of the 2nd album, ‘Run Devil Run’ on the 22nd after conquering the world of popular music once again with the 2nd album ‘Oh!, boasting of their influence as everyone’s favorite girl group.

This album is expected to bring enormous responses from fans as the concept of the title track, ‘Run Devil Run’, hinted at the end of the music video of ‘Oh!’, has already drew great attention from music fans and even created an alias, ‘Black Girls’ Generation’, and also the teaser pictures of each member shot in the ‘Glam and Chic’ concept were released one after another from March 11 and became the hottest issue in the media world.

The repackaged album to be released on the 22nd contains a total of 15 songs comprised of 12 songs from the 2nd album and 3 additional songs including ‘Run Devil Run’, the title song, ‘Echo’ with addictive melody and refreshing melody, and the acoustic R&B version of ‘☆★☆.’

The title song, ‘Run Devil Run’, perfectly combined the powerful and wild sound of synth pop and the charismatic voices of Girls’ Generation, attracting listeners passionately and intensely unlike the charms presented by Girls’ Generation previously. The lyric also gives a warning to a bad boy in frank and unhesitating words to double the intensity that the song carries.

This is the joint work of composers around the world including Busbee (America), Alex James (England), and Kalle Engstrom (Sweden). Ke$ha (Kesha), A new American pop star and a friend of the composer, participated in the recording of the guide version of this song around August 2008 before her debut and this guide version made a little scene as it was illegally released in YouTube and was deleted from the site, but still Girls’ Generation is the first official releaser of this song.

‘Echo’, the newly added song, hooks the audience with the lovely and refreshing ambience while the lyric depicts a funny situation where a girl who hears the echo of the voice of a guy living inside the imagination that every woman in the world loves him whom she unwittingly fell in love.

‘☆★☆’ which was included in the 2nd regular album and also became noticed along with ‘Oh!’ was rearranged into an acoustic R&B. The acoustic R&B version included in the repackaged album dynamically depicted the sadness from heartache to express even more sorrowful emotion unlike the original song that suggested a beautiful scene from a tale.

Girls’ Generation will be appearing in various stages with ‘Run Devil Run’, the title song, and is expected to start another Girls’ Generation craze as much as the group is already enjoying tremendous popularity with ‘Oh!’