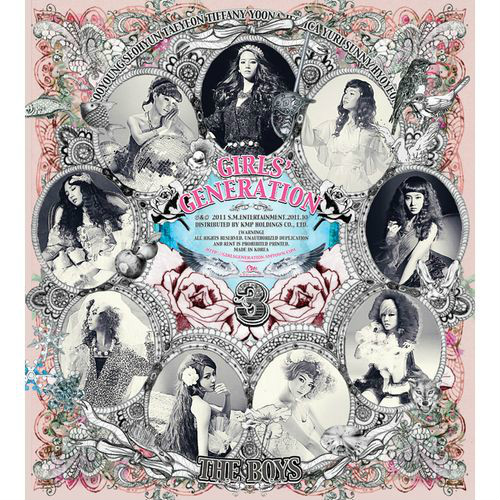 Release of US Single through Interscope Records! Worldwide Record Sales including Europe and South America through Universal Music Group! Making Inroads into the World Market with the Work of Famous Michael Jackson Producer, Teddy Riley!

Girls’ Generation, the girl group that brought a worldwide sizzle is finally coming back.

Girls’ Generation is going to release the maxi single of the new song titled ‘The Boys’ in the USA in November through the Interscope Records, the major label under the world’s largest record company, Universal Music Group, and the agency for Lady Gaga, Eminem, Black Eyed Peas, and more in addition to the simultaneous release of
‘The Boys’, the title song of the 3rd full-length album, worldwide on October 19.

Girls’ Generation also decided to release the album containing ‘The Boys’ in the world including the USA, Europe, and South America through the Universal Music Group, expecting hot responses from fans of the world.

With the release of sound source on the 19th, the music video for ‘The Boys’ will be presented to the world for the first time through S.M. Entertainment’s official You Tube Channel and the Facebook and also the 3rd full-length album will be officially released in Korea on the same day that October 19th will be so called “Girls’ Generation Day.”

Especially the title song has the elegant beat, sound, and melody attracting the ears of the world shows the talent of Teddy Riley who is one of the world’s top 3 producers and the Michael Jackson producer.

For this 3rd full-length album, ‘The Boys’, is the new album Girls’ Generation is releasing in 11 months after the 3rd mini album, ‘Hoot’, released in October last year, and it contains 12 songs that fully present the charming voices and sensitivities of Girls’ Generation through the great works of the world-famous producer, Teddy Riley, and a number of famous composers such as Young-Jin Yoo, Young-Hu Kim, hitchhiker, Kenzie, and Sung-Je Hwang.

The Title Song ‘The Boys’ – The Combination of the Best Group Girls’ Generation and One of the World’s Top 3 Producers, Teddy Riley!
Creative and Futuristic Sound to Fascinate the World, Capturing Ears of Fans!

The title song, ‘The Boys‘, is the song created exclusively for Girls’ Generation by one the world’s top 3 producers, Teddy Riley, and it is a pop-urban dance song presenting Teddy Riley’s unique futuristic sound laid on top of the powerful drum beats and eccentric harmony. By giving consideration to Girls’ Generation who will be performing in the world stages, he focused on writing a song with elegant beat, sound, and melody that can appeal to the whole world rather than writing a so called ‘hook song’ which simply repeats the hook of the song. Following this concept, Young-Jin Yoo, a hit composer, completed the lyric sensuously with the message that Girls’ Generation gives to all boys and men of the world on behalf of the girls and women, ‘Get up and have confidence and courage to make your dream come true.’ to further the perfection of the song up to the ‘world class level’.


Teddy Riley is a member of ‘Black Street’, the father of ‘New Jack Swing’ that shook up the hearts of music fans throughout the 1980’s and the 1990’s, was the producer of songs for Michael Jackson such as ‘Remember The Time’, and is currently producing the million seller album of
Lady Gaga. And for he is the master of sound continuously creating the best songs, the special team-up of him and Girls’ Generation will definitely mesmerize the music fans of the world.

Grand Release of the Korean Version of the Big Hit in Japan, ‘MR.TAXI’!
Expecting Explosive Response!

The Korean version of ‘MR.TAXI’ is also drawing attention for it was ranked at number one in the ORICON Daily Chart after it was released as a single in Japan in April this year and enjoyed great popularity while selling more than 680,000 copies to set the record of the largest record sales by the foreign artist. It was also included in the first full-length album released in Japan. The Korean version of this song received hot responses at the second solo concert of Girls’ Generation held in Korea in July and is expecting to spark another fad following the one in Japan regarding the impressive powerful performance of
Girls’ Generation.

First Song Written with Soo Young’s Lyric,
‘How great is your love’, an R&B Ballad to Experience the Rich Sensitivity of
Girls’ Generation Members!

Also, the 3rd full-length album contains the first song written with Soo Young’s lyric, ‘How great is your love’, which is expected to have even greater responses from music fans. ‘How great is your love’ is a bright R&B ballad where the lyric comprised of words delicately depicting the flutter and joy of a girl in love perfectly match the beautiful and lyrical melody, and fans will be able to experience more enriched sensitivities of Girls’ Generation members.

This album also contains the songs that present
Girls’ Generation’s unique fresh and lively charms from ‘Telepathy’, a bright synth-pop that tells about a heart fluttering in love, to ‘Say Yes’, an exciting retro-pop, and ‘VITAMIN’, a cheering song from Girls’ Generation that has a broad range of fans including men and women of all ages to double the fun of the listeners.

Also, there are songs with diverse musical colors such as ‘TRICK’, a dance song that tells a story about
Girls’ Generation who became magicians, ‘OSCAR’, where the vocals with the strong character stand out in the midst of the strong and dark sound, and ‘Top Secret’ that has the charm of the retro sound produced by Girls’ Generation among 12 songs to enhance the perfection.

After sweeping Korean record awards last year including ‘Golden Disk Awards’, Girls’ Generation engaged in various activities overseas as the representative artist of Asia such as setting the record of the largest record sales by the foreign artist with the first full-length album released in Japan in June this year which sold as many as 680,000 copies, successfully holding the Arena Tour Concert throughout Japan which gathered an audience of over 140,000, setting the record of the first overseas girl group in history to draw the largest audience (31,000) in a single concert in Taiwan, and winning resounding success in the SMTOWN LIVE WORLD TOUR in Paris, France. Owing to successful overseas activities, the new album,
‘The Boys’, is expected to confirm the uplifted global status and influence of Girls’ Generation and also set various new records.