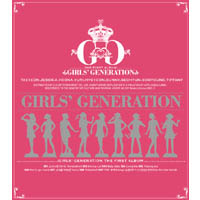 
Girls’ Generation (SM Entertainment) is releasing their first regular album, ‘Girls’ Generation’ on November 1st and taking the wraps off the new songs and stages after hitting the tin pan alley of Korea in 2007 with the Girl-Mania.

Girls’ Generation made their debut with the first single, ‘Into the New World’ on August 2nd and hit the tin pan alley of Korea in no time with the fresh charms of the teenagers and ranked first on the M.Net M Count Down in 2 months, and this time, they will sweep the music fans off their feet once again with much upgraded charms unique to Girls’ Generation and the healthy energy of teenage girls.

Other than the song, ‘Girls’ Generation’, the album also includes ‘Ooh La-La!’ which incorporated the stories of fairy tales like Cinderella and Snow White into the lyric and impressive melodies, ‘Kissing You’, a house style dance tune with the sweet lyric sung as if they are whispering love to their boyfriends and created by the hit composer Lee Jae-Myeong, and ‘Baby Baby’, a shy confession of love and a present from Hwang Seong-Je, the composer of BoA’s ‘Atlantis Princess’, to Girls’ Generation, to double the freshness of Girls’ Generation.

Also, you can enjoy the sensitive ballads that were not released with the last single such as ‘Tears’ with the impressive, sweet and lovable vocal and ‘Complete’ with elegant melodies and clear and transparent harmony of the members of the Girls’ Generation in the refrain that gives the comfortable feeling.

The top star of the Korean Wave and the singer-songwriter, KANGTA, presents ‘7989’ Wonderful duet of the leader of Girls’ Generation, Tae Yeon, and KANGTA

The special song contributed by the top star of the Korean Wave, KANGTA, ‘7989’ is also drawing attention. This song with medium tempo is filled with KANGTA’s unique sweet melodies and the bright and warm mood that suits the sensitivity of Girls’ Generation, and it was also sung by KANGTA and the leader of Girls’ Generation, Tae Yeon, in a duet creating wonderful harmony and giving charms that you never felt before. The lyric expressed the innermost feelings of a couple with large age gap just as implied in the title in a cute way that it is expected to bring great attention from the music fans.

Girls’ Generation will join the race to top the music charts through the most desired first stage performance of the title song of their first album, ‘Girls’ Generation’, in the beginning of November.