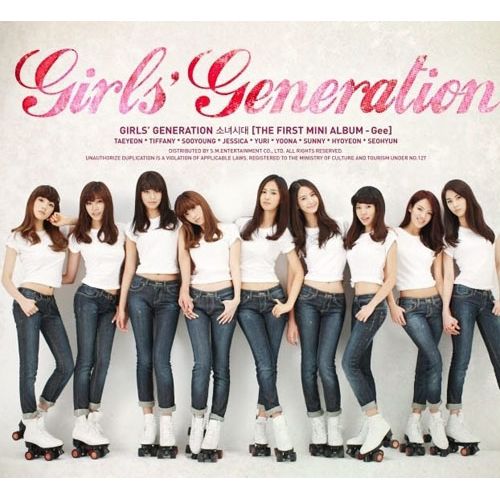 
The 9 happy and sprightly girls are finally back. Girls’ Generation is starting their new year with the release of their first mini album, ‘Gee’, on January 7th.
All members made great achievements in various areas after finishing up their first album activities, and they are going to present more enhanced performances and charms through this mini album that the fans are already excited to listen to.

‘Gee’, the exciting title song telling you about the heart of a girl fell in love for the first time

‘Gee’, is one of English exclamations equivalent to ‘O My!’ and ‘Gosh’, and this is a fast dance song that tells about the heart of a girl who fell in love for the first time and does not know what to do, and you can feel Girls’ Generation’s fresh charms through the song. This exciting song, presented by the famous composer, E-TRIBE, will charm you at a breath with the repetition of the word, ‘Gee’, the lyric with unique rhythm, and the melody line in the refrain, and with the wonderful performance of Girls’ Generation, it will please your ears and eyes at the same time.

Also, a joyful punk rock song, “way to go” is the song contains a message of cheering from Girls’ Generation that you could get energetic. This song is the original version of famous ‘Haptic’ CM song. ‘Let's talk about LOVE’ also has the impressive lyrics delivering the message of hope and courage to the people with broken hearts, and the clear voices of the members are nicely combined with neat and brilliant arrangement.

The album contains total 5 songs including ‘Dear. Mom’, a pop ballad with a beautiful lyric containing the love of a daughter toward her mother and ‘Destiny’ which presents great fun through the melody that travels between feigned and natural voices, strong beat, and powerful refrain, and all songs in the album will let you feel great sensibilities of the Girls’ Generation.

Especially, this mini album is the new album, Girls’ Generation is releasing in a long time that famous composers like E-TRIBE, Kenzie, Ik-su Ahn, and Young-hu Kim participated in the album to make the perfect album even better.

Girlls’ Generation led the age of female singing groups in full by setting a record of becoming the first female group in 6 years to sell over 100,000 albums and making 4 songs including ‘Into the new world’, ‘Girls’ Generation’, ‘Kissing You’, and ‘Baby Baby’ hits on the charts continuously one after another that their mini album, ‘Gee’, is also expected to become a big hit.